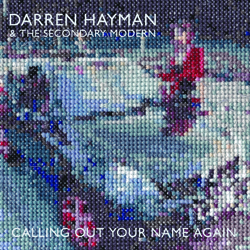 ‘Calling Out Your Name Again’ is the second single from Essex Arms, featuring Emmy The Great and available both on 7-inch and as a digital download. Darren and Emmy sing about illicit love in abandoned cars, accompanied by buzzing strings and frenetic percussion. The song is backed by three other tracks from the album sessions; ‘Essex Arms’, ‘Beach Head’ and ‘Until We Got Bored’.